Chris Hedges is a Pulitzer Prize–winning journalist who was a foreign correspondent and bureau chief in the Middle East and the Balkans for fifteen years for The New York Times. He previously worked overseas for The Dallas Morning News, The Christian Science Monitor, and NPR. He was the host of the Emmy Award­–nominated RT America show On Contact and previously hosted a show on TeleSur. He currently hosts a show every Friday on The Real News. Hedges, who holds a Master of Divinity from Harvard University, is the author of numerous books and was a National Book Critics Circle finalist for War Is a Force That Gives Us Meaning. He has taught at Columbia University, New York University, Princeton University, and the University of Toronto. He has taught college credit courses through Rutgers University in the New Jersey prison system since 2013. You can find him at chrishedges.substack.com. 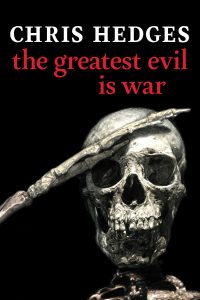 The Greatest Evil is War

An unflinching indictment of the horror and obscenity of war by one of our finest war correspondents.

Drawn from experience and interviews by Pulitzer-prize-winner Chris Hedges, this book looks at the hidden costs of war and what it does to individuals, families, communities and nations. In fifteen short chapters, Chris Hedges astonishes us with his clear and cogent argument against war, not on philosophical grounds or through moral arguments, but in an irrefutable stream of personal encounters with the victims of war, from veterans and parents to gravely wounded American serviceman who served in the Iraq War, to survivors of the Holocaust, to soldiers in the Falklands War, among others. Hedges reported from Sarajevo, and was in the Balkans to witness the collapse of the Soviet Union.

“Chris Hedges has compiled a remarkable record of reporting and analysis. He has been an incomparable source of insight and understanding, both in his outstanding career as a courageous journalist and in his penetrating commentary on world events. This is a contribution of great significance in these troubled times.”