Dahlma Llanos-Figueroa was born in Puerto Rico and raised in New York City. She is a product of the Puerto Rican communities on the island and in the South Bronx. As a child she was sent to live with her grandparents in Puerto Rico where she was introduced to the culture of rural Puerto Rico, including the storytelling that came naturally to the women in her family, especially the older women. Much of her work is based on her experiences during this time. Llanos-Figueroa taught creative writing, language and literature in the New York City school system before becoming a young-adult librarian and writer. The hardcover edition of Daughters of the Stone was shortlisted as a 2010 Finalist for the PEN/Robert W. Bingham Prize. Her second novel, A Woman of Endurance released in April 2022, the Spanish language edition, Indómita releases in May 2022. Her short stories have been published in anthologies and literary magazines such as Breaking Ground: Anthology of Puerto Rican Women Writers in New York 1980-2012, Growing Up Girl, Afro-Hispanic Review, Pleaides, Latino Book Review, Label Me Latina/o, and Kweli Journal. She lives in New York City. www.DahlmaLlanosFigueroa.com  Twitter: @writer1949  Instagram: @dahlmallanosfigueroa 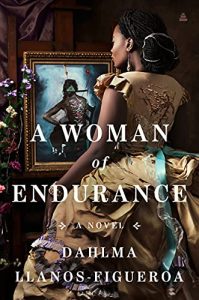 Combining the haunting power of Toni Morrison’s Beloved with the evocative atmosphere of Phillippa Gregory’s A Respectable Trade, Dahlma Llanos-Figueroa’s groundbreaking novel illuminates a little discussed aspect of history—the Puerto Rican Atlantic Slave Trade—witnessed through the experiences of Pola, an African captive used as a breeder to bear more slaves.

“Dahlma Llanos-Figueroa's Daughters of the Stone sings as few novels can. It also tells us of a culture and nation that is underrepresented in our literature: Puerto Rico. And it does so with brilliant flourishes in a narrative both gripping and intimate. Conveying a wide sweep of history, as witnessed by several generations of women, the book has the warmth of autobiography while sustaining a firm and stately control of technique and language.”

— 2010 PEN Literary Awards Program on Daughters of the Stone