James Romm is an author, reviewer, and the James H. Ottaway Jr. Professor of Classics at Bard College in Annandale, New York. He specializes in ancient Greek and Roman culture and civilization. His reviews and essays have appeared in the New Yorker, the Wall Street Journal, the London Review of Books, the Daily Beast, and other venues. He has held the Guggenheim Fellowship (1999-2000), the Birkelund Fellowship at the Dorothy and Lewis B. Cullman Center for Writers and Scholars at the New York Public Library (2010-11), and a Biography Fellowship at the Leon Levy Center of the City University of New York (2014-15). He currently oversees the ambitious Ancient Lives series recently launched by Yale University Press. 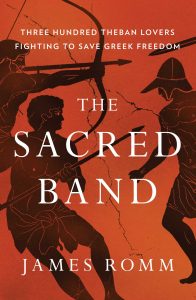 From classicist James Romm comes a “striking…fascinating” (Booklist) deep dive into the last decades of ancient Greek freedom leading up to Alexander the Great’s destruction of Thebes—and the saga of the greatest military corps of the time, the Theban Sacred Band, a unit composed of 150 pairs of male lovers.

"Romm, a Bard College professor, has an unusual knack for writing about ancient history for general readers ... I was most stirred by a parallel narrative examining how the story of the Sacred Band both inspired the beginnings of the struggle for gay acceptance in the 19th century and was also long a source of discomfort for many professional classicists." —The New York Times, New & Noteworthy

"[Romm] deftly pieces the story together ... Mr. Romm negotiates artfully in fluent, accessible prose. But he really comes into his own when describing the Sacred Band’s dramatic and elegiac end." —Wall Street Journal